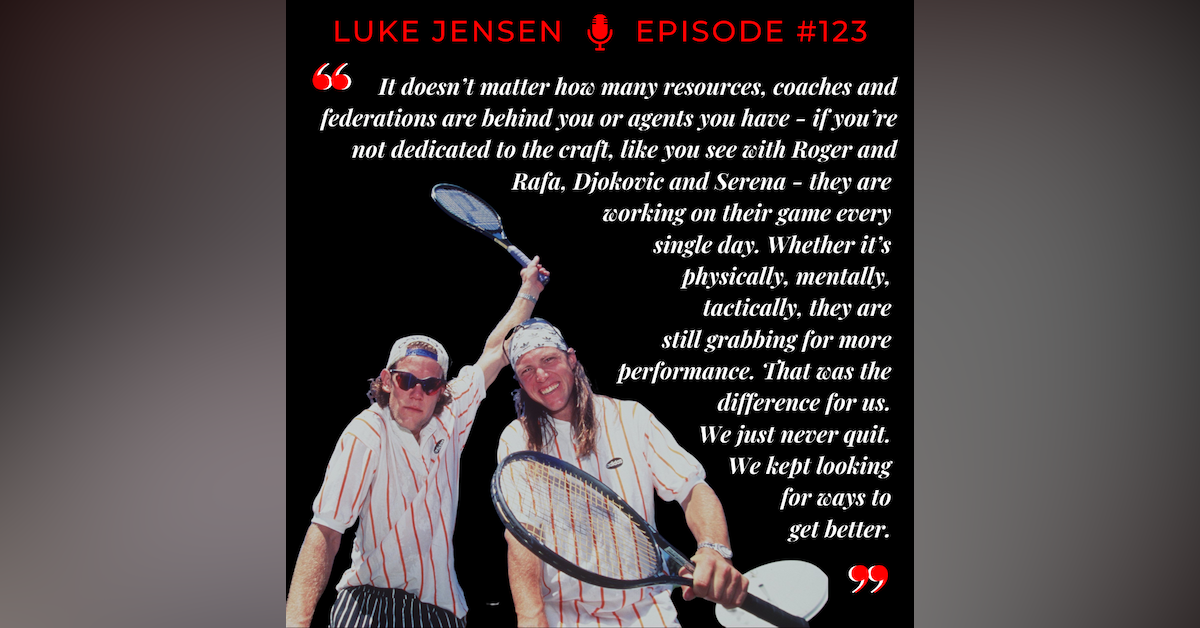 If you were a tennis fan in the 80´s and 90´s, you wouldn´t have missed the Jensen Brothers!

The original American doubles brothers, Luke & Murphy Jensen were known for their high energy on court, chest bumping and high fives, as well as their long hair and bandanas.

Nicknamed the Rock n Roll tennis brothers, they won the mens doubles title at Roland Garros in 1993. Product endorsements poured in and the pair went onto appear on the cover of Rolling Stone and People magazines, increasing global recognition of doubles.

In this episode we speak to Luke Jensen, the elder brother, about his tennis journey which saw him reach world junior number 1 in singles and doubles, and number 6 ATP in doubles.

Luke has since moved into coaching and is also an analyst for ESPN. He was Head Coach of the Women´s Syracuse tennis team for 7 seasons, and is current Coach of the NY Empires who won the 2020 World Team Tennis title. He also co-founded the Jensen-Schmidt Tennis Academy for Down Syndrome.

Luke tells us what is was like growing up in a successful tennis family, his sisters also played to Grand Slam level, and discusses Murphy´s struggle with alcohol and drug addiction during their playing days, and how they are using that experience to help others.

An episode full of energy and fun, enjoy!

The Jensen-Schmidt Tennis Academy for Down Syndrome.

Catch up with all the latest episodes on our website, www.controlthecontrollables.co.uk

Don´t miss an episode! Follow us on Apple Podcasts. You can also Rate and Review the podcast and let us know what you think. We´d love to hear from you!