118: Embracing the Power of Philanthropy as a Nonprofit Leader 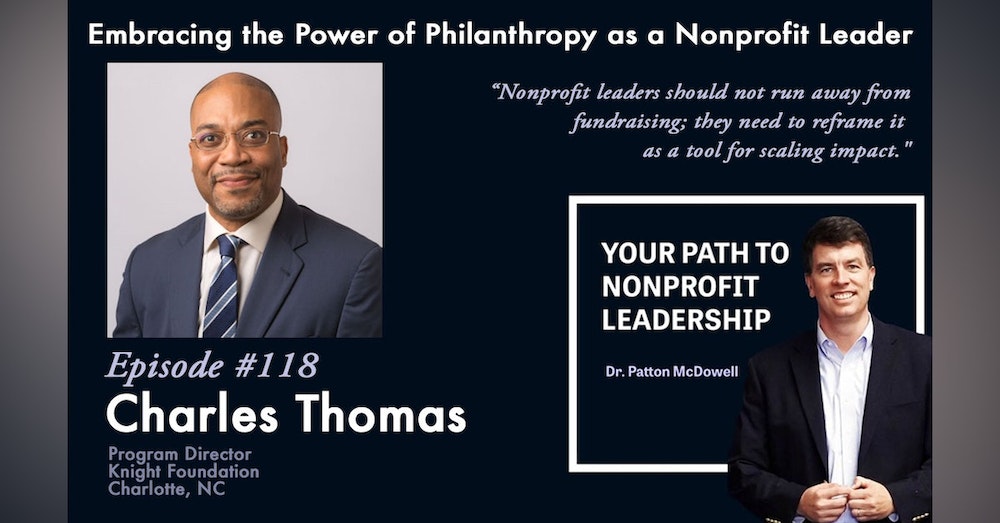 118: Embracing the Power of Philanthropy as a Nonprofit Leader

Philanthropy is the lifeblood of nonprofit organizations, but the acquisition of charitable dollars can be a motivational barrier for many nonprofit leaders.  We all have hang-ups about money, and that can hurt our enthusiasm to actually ask for funds for the causes we care deeply about. Charles Thomas has been on both sides of philanthropy, as an executive director of two organizations, and now the Program Director for a national foundation making investments in critical community needs. In episode #118 of the Path Podcast, Charles breaks down these barriers to fundraising and offers practical advice to help you turn your hesitation into enthusiasm for the investments you’ll be seeking.

Charles Thomas joined the Knight Foundation in February of 2016, and under his leadership the Foundation has invested over $25M in the Historic West End, the Charlotte Mecklenburg Library and in numerous Charlotte arts and local journalism initiatives. Raised in Charlotte, Thomas is the former executive director of Queen City Forward, a hub for entrepreneurs who have business ideas that address social needs. Prior to leading Queen City Forward, he served as the education director of The Light Factory Contemporary Museum of Photography and Film. A professional photographer, Thomas co-published a book of photography and stories with author Valaida Fullwood titled “Giving Back: A Tribute to Generations of African American Philanthropists.” In addition to winning the 2012 Terry McAdam Book Award, Thomas and Fullwood partnered with Johnson C. Smith University to create and launch a traveling exhibition titled the “Soul of Philanthropy: Reframed and Exhibited.”  He serves on the board of trustees of Charlotte Mecklenburg Library and is an active member of the New Generation of African American Philanthropy giving circle. Thomas earned a bachelor's degree in economics from Duke University. He lives in Charlotte with his wife, Micaila Milburn, and their three sons.