131: Paying it Forward as a Nonprofit Leader (Michael DeVaul) 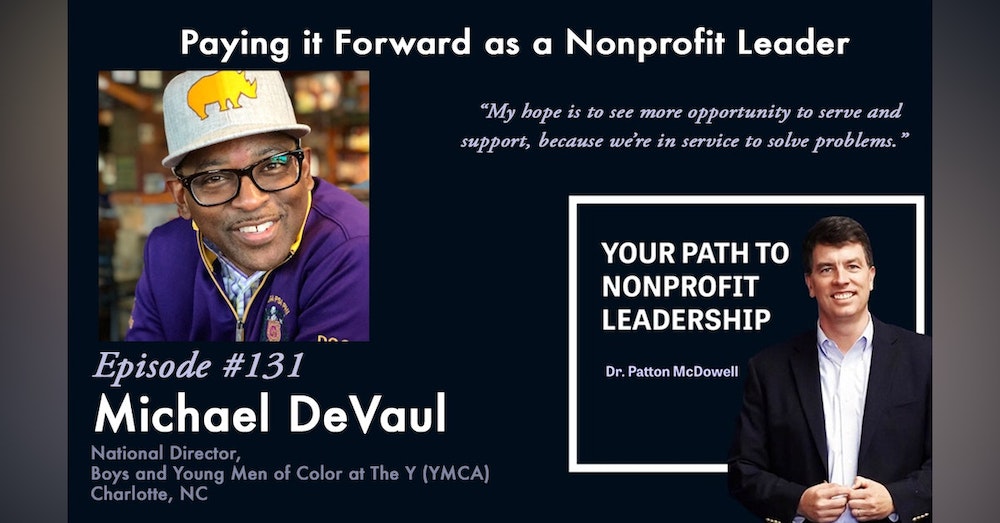 131: Paying it Forward as a Nonprofit Leader (Michael DeVaul)

Passion is often found in young leaders, while wisdom and experience are words associated with successful senior nonprofit leaders. Where are you on your journey of nonprofit leadership?  Do you realize the value of self-assessment? Michael DeVaul has been on both sides of that bridge for more than three decades in the nonprofit sector and reflects on leading by example through action.  In episode #131 of The Path Podcast, Michael shares his five steps to go from being a transactional leader to a transformational leader.  Patton and Michael discuss harnessing personal and professional experiences to be a more impactful nonprofit leader.  As a man of action, Michael is a role model for change, but he believes you must take action to make change.

Michael is a seasoned veteran with 38+ years in the nonprofit sector. From Evanston, Illinois, he was a member of the Emerson Street YMCA and Ebenezer A.M.E. Church two strong black institutions which along with his extended family, helped seed his potential. In 2019, Michael was awarded the YMCA of the USA Carlos Sanvee award for his work strengthening emerging young leaders.  However, his highest honor remains the Champions of Change award given by the Obama White House for his efforts in community building and global work in Senegal and Bangladesh. Today, Michael serves as the YMCA of the USA National Director for Boys and Young Men of Color with a focus to lead reimagining policies, practices, and procedures across 100+ cities to improve the outcomes, impact, and economic mobility of all young men of color. He believes that to effect change you must first understand and develop your personal brand.  Driving culture involves reinforcing beliefs and behaviors that determine how an organization's leaders and the community they serve interact.  Only then can you address inequities for the purposes of reimagining an important concept called belonging. Michael lives in Charlotte and is most proud of being a husband, brother, father, uncle, and friend.