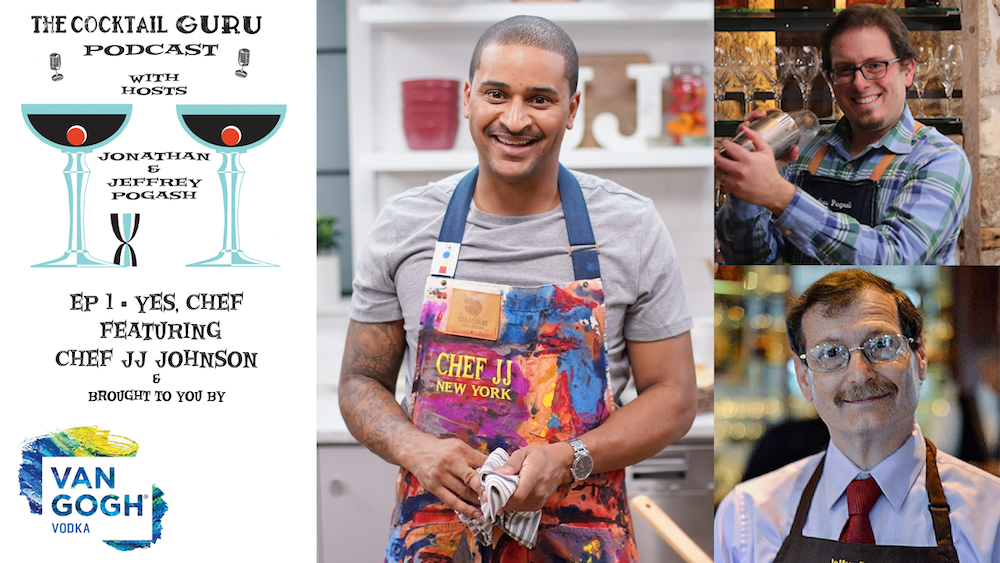 On this debut episode of THE COCKTAIL GURU PODCAST, brought to you by Van Gogh Vodka, Chef JJ Johnson dishes on his colorful culinary journey and much more with hosts Jonathan & Jeffrey Pogash!

To listen to the episode click on the player below, or click on one of our distribution partners icon buttons.

On this debut episode of THE COCKTAIL GURU PODCAST, brought to you by Van Gogh Vodka, Chef JJ Johnson dishes on his colorful culinary journey and much more with hosts Jonathan & Jeffrey Pogash!

GUEST BIO
Joseph "JJ" Johnson is a James Beard Foundation Book Award-winning chef and author, best known for cooking the food of the African Diaspora. He is a Chef on Buzzfeed’s Tasty platform and a television host on Just Eats with Chef JJ, airing on TV One’s new network, Cleo TV.

Chef JJ is the founder of Ingrained Hospitality Concepts LLC, a collaboration of industry professionals dedicated to creating great restaurants while sharing international cuisine with amazing hospitality. The group recently opened FIELDTRIP. The quick-casual rice bowl shop in Manhattan's Harlem neighborhood highlights rice traditions from around the world with globally-inspired flavors and techniques.

Chef JJ’s signature style was inspired by the Caribbean tastes he grew up with, inspiration from his travels and his signature R+B and hip-hop playlist. Chef JJ published his first cookbook, Between Harlem and Heaven: Afro-Asian-American Cooking for Big Nights, Weeknights, and Every Day, in 2018. He serves on the James Beard Impact Programs Advisory Committee and sits on the junior board of Food Bank for New York City, taking action to end hunger.

Johnson was born in 1984 in Long Island, New York, but spent his youth in the Poconos, where at the age of seven he was inspired to become a chef.

After seeing a commercial for the Culinary Institute of America, Johnson told his mother he wanted to become a chef. But it was only after watching his Puerto Rican grandmother serve up butternut squash soup and other ethnic dishes that he knew he had no choice.

In 2011, Johnson competed and won Bravo's Rocco's Dinner Party cooking competition, quickly catching the eye of restaurateur Alexander Smalls. Smalls invited Johnson to breakfast to introduce the concept of Afro-Asian cooking to him. A year later, Johnson joined Smalls on an extended trip to Ghana, where they prepared a series of American-themed dinners.

Upon their return, Smalls and Johnson developed 36 different menus that would ultimately be narrowed down to one Afro-Asian inspired menu for The Cecil in 2013. Since its opening, the restaurant has garnered several awards, including Esquire's "Best New Restaurant in America." Johnson himself was ranked among Forbes’s "30 Under 30" in the Food & Wine category (2014), Zagat’s "30 Under 30" (2014), and Eater.com's "Young Guns" (2014). Johnson and Smalls also co-authored the Afro-Asian inspired cookbook, Between Harlem and Heaven. In 2018, Johnson became the chef at The Henry at Life Hotel in Manhattan, with a menu that focuses on African diaspora cuisine.

In 2019, Chef JJ and Ingrained Hospitality opened FIELDTRIP, a quick casual rice bowl shop in Harlem. FieldTrip is a celebration of rice and culture showcasing global flavors through bowls of freshly milled, unbleached, and un-enriched rices. They are the “granddaddy” heirloom grains of rices we commonly know today, and each has its own history. FIELDTRIP’s mantra, "Rice is Culture," was born of the realization that rice can be found at the center of tables of so many cultures around the world. Rice connects people. The cuisine is influenced by global flavors from Asia to Africa to America and the Caribbean.

"Chef JJ Johnson shares how donating meals to families in need saved his restaurant: FieldTrip has donated over 100,000 meals—between 1,000 and 1,500 meals a week."
TODAY (March 1, 2021) (https://www.today.com/food/chef-jj-johnson-shares-how-donating-meals-saved-his-restaurant-t207069)

"How JJ Johnson Beat 2020: As early as January, the chef was in danger of losing FieldTrip. Now, he has two more restaurants opening later this month."

THE COCKTAIL GURU PODCAST is produced by  1st Reel Entertainment and distributed by Anchor.FM and EatsDrinksTV, a service of the Center for Culinary Culture—Home of the Cocktail Collection, and is available wherever fine podcasts can be heard.

--- Send in a voice message: Leave a message for the Cocktail Guru's on Anchor!