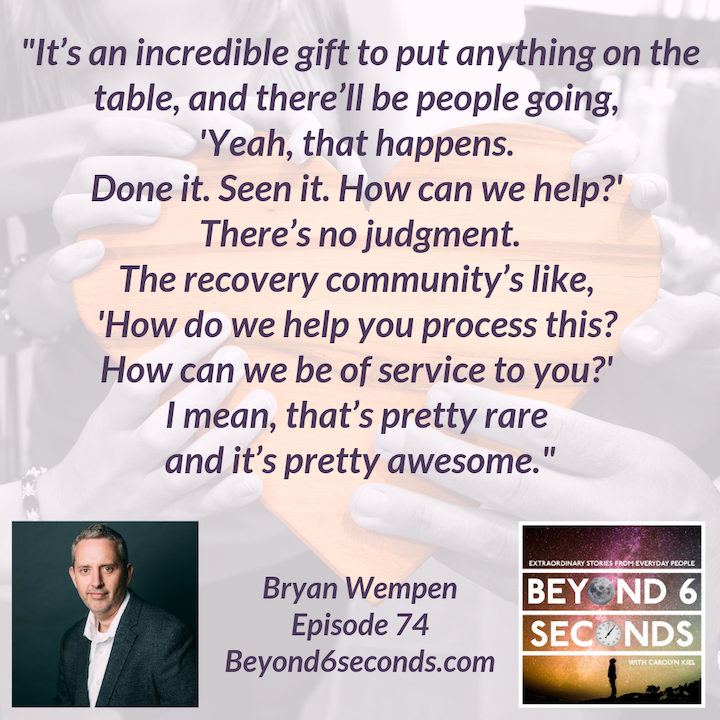 Bryan Wempen is a speaker and an author.  His latest book, “Sober Is Better, My Note to Self,” describes Bryan’s journey into daily drinking and finding his way to living a sober lifestyle.   In this episode, Bryan walks us through his...

Bryan Wempen is a speaker and an author.  His latest book, “Sober Is Better, My Note to Self,” describes Bryan’s journey into daily drinking and finding his way to living a sober lifestyle.

In this episode, Bryan walks us through his story – how early trauma and a feeling of disconnectedness led him to become a high-functioning alcoholic by high school, his experiences with drugs during his college years, what it was like growing his career while struggling with addiction, and what motivated him to go into recovery. He also describes the tremendous support that the recovery community has provided him, as well as the impact his book has had on readers.

You can learn more about Bryan at www.BryanWempen.com and buy his book on Amazon at Sober Is Better: My Note to Self.

Bryan Wempen was born in Redwood City California, the future world-famous Silicon Valley.  He was adopted at two days old and started a journey across several states with his new parents to live in the mountains of Wyoming. At age four, his family moved to the Midwest and began the farming life in Nebraska. Fourteen years from when his story started, he experienced his first alcohol blackout. By 18-years-old he was in trouble with the law and entirely dependent on alcohol.

Bryan started with drugs his freshman year in college while driving to his national guard duty. He experienced a willingness for recovery from drug use for the first time in 1993 and eventually stopped for good in 1996.

Once the drugs were gone, his dependency on alcohol quickly worsened. At this time Bryan found himself quietly working to avoid legal issues arising from his drinking while working to maintain his roles as successful corporate executive, husband, and stepfather.

More years of blackout drinking, humiliating and demoralizing behavior added to the guilt and shame of addiction. Bryan began questioning if he can stop his drinking. It all changed in May 2010 when he found his answer about quitting. Bryan couldn't hide from himself any longer and asked a longtime sober friend for help. He has been successfully sober since then.

His first book in 2015, "Note to Self: A Collection of 99 Life Lessons," was received well by the recovery, healing, and spiritual communities around the world. In his current book, “Sober Is Better, a Note to Self,” Bryan shares his journey into daily drinking and finding his way to living a sober lifestyle. He highlights how awkward, messy, and beautiful addiction-recovery is for all on this path to sobriety.

Since his last book in 2015, Bryan has remarried and enjoys working with behavioral healthcare technology clients.  He currently resides in Kansas City, Missouri.