Welcome to the 'Behind the Bottom Line' Summer Special 2022. Two great episodes to listen to on holiday. Today's stories are:

⚽ ‘The Debt’ – Jimmy King was once a prince on the football pitch, worshipped by thousands. Now, he’s just a bitter, old man in a care home, waiting to die. But not everybody has forgotten his glory days. Can someone bring them back for a moment?

💔 ‘Another death in Venice’ – Miss Winterleigh is a woman with a past and a dark secret. She only has one remaining wish, but how is she going to get it? And who can help her?

🎧 These two stories have been sound-scaped. To get a truly immersive experience, listen with headphones.

It was the shape of his nose that I first recognised. I hadn’t seen Jimmy King for forty years, but that nose – created through the coming together of Jimmy’s face and the head of some Sunderland defender in the last minutes of extra time of a League Cup semi-final match – was unmistakable.

I spotted him while chatting with some elderly ladies, friends of my mother-in-law, in an old people’s home. My mother-in-law had died a couple of weeks earlier and I was visiting the home for the last time to collect her things and pay some bills. Because my face is familiar to many people - I’m a newsreader on the television - the head of the home, Mrs Marsden, asked if I would have tea with her friends. She said they would like it, so I agreed.

The home had two pleasant social rooms connected by a door where the residents could be together. We were sitting at a table in the larger room while in the other one a television was showing football and a few elderly men were sleepily watching from their armchairs. I could hear the commentators’ voices in the background, rising and falling as the ball travelled here and there.

“Will you turn the bloody telly up?” a voice suddenly roared. “I can’t hear a thing they’re saying! Where’s the remote?”

My tea companions clucked like startled chickens at this interruption, and through the door I could see the elderly men were also resentful of this newcomer disturbing their peaceful afternoon. He was wearing a rather dirty old dressing gown and walking slowly and painfully using a stick. One side of his body seemed very stiff and I guessed he must have had a stroke. Except for his nose he was no longer the athlete I had worshipped as a child.

“Who’s that gentleman?” I asked one of the ladies, wanting to be sure I was right. “I haven’t seen him here before.”

“Oh, that’s Mr King. He’s new. We don’t like him at all. He shouts rude things at the television when the football is on. We’ve had to complain to Mrs Marsden about it!”

Oh, Jimmy, I thought, why did this have to happen?

I was the only girl in our family. From the time I was very little my brothers always took me to watch our local football team, Trent United. When I started we were in the third division, but when this story takes place I was sixteen and we’d just been promoted to the first division, as it was then called. We went to every game, home or away, and most of the family conversation revolved around the team. I was as keen as my brothers, but in 1967 when Jimmy King joined the club, I became obsessed.

He came with a reputation. So-called experts would shake their heads wisely and say things like “Nice footwork, but that’s not what it’s all about, is it? He doesn’t play for the team, does he?”

And there were the scandals. The Jaguar he crashed after a night out in London, the models he dated, the parties the police had to break up – but I didn’t care. What he did on the pitch was art and somehow he turned our team, made up of solid but fairly ordinary professionals, into something special.

’67-68 was a magical season. With Jimmy there, everybody feared us, even the big clubs like Leeds, Liverpool or the Manchesters. My family was in delirium and after the games we’d get the players to sign programmes or photographs. But there was one player I could never speak to, even though I always carried his picture with me, and that was Jimmy. You see, though I was used to young men because of my brothers, I couldn’t talk or even go near Jimmy. If he looked in my direction I would tremble and turn away.

Instead I wrote articles about his football for a school magazine. Then a teacher showed them to the editor of a local newspaper and he asked me for match reports from the point of view of a fan. Five shillings an article which was good money for our family, but more importantly for me, it meant I could write about Jimmy. And I poured my heart into everything I wrote about him.

One day I was dropping off my article at the newspaper when the regular sports journalist shouted out to me:

“Heard about Jimmy? One of them Italian clubs wants him next season! I’m going down to the club now for the official announcement!”

Oh, it was hard. I couldn’t let anyone know my heart was breaking, though it was. That night, and many nights afterwards, I cried myself to sleep. I didn’t want to write anymore but the editor wouldn’t stop asking me and eventually I started again, which was how my career as a journalist began. Later I went into television and finally ended up as the anchor for the main news programme on the BBC. And I owed it all to Jimmy.

I looked at him secretly as the conversation went on around me. It hadn’t worked for him in Italy. He’d had a bad injury in his first game and never really recovered. Soon he started drinking and causing trouble and no club would take him. And now, he sat in an old peoples home, where nobody knew anything about the genius he’d once been, sick, old and waiting to die. But perhaps, I thought, there was still a small thing I could do for him. I stood up and walked over to his chair.

“Mr King?” I asked. “Jimmy King of Trent United in 1967? Would you do me the honour of signing this photograph I have of you from those days?”

I opened my handbag and handed over the picture I’d carried all those years. It was quite battered, even though I’d looked after it carefully. Everybody, including Jimmy, looked at me in amazement, and then I sat down and we talked about the old days while they listened. The time the crowd at Manchester United stood and clapped him off the pitch at the end of a game. The goal he’d scored against the great Tottenham team of ’67 which had won the FA cup. The match at West Ham when Bobby Moore asked for his shirt at the final whistle.

“Thank you,” said Mrs Marsden when I finally left. “You made Jimmy very happy. Nobody would have believed him if he’d told those stories himself. It’ll be much easier for him now.”

“Everything settled?” my husband asked me.

Another death in Venice 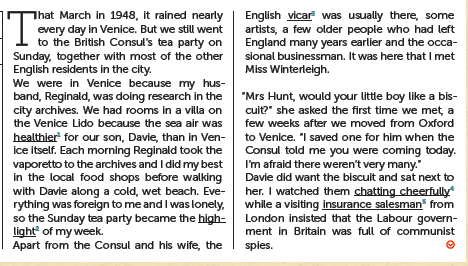 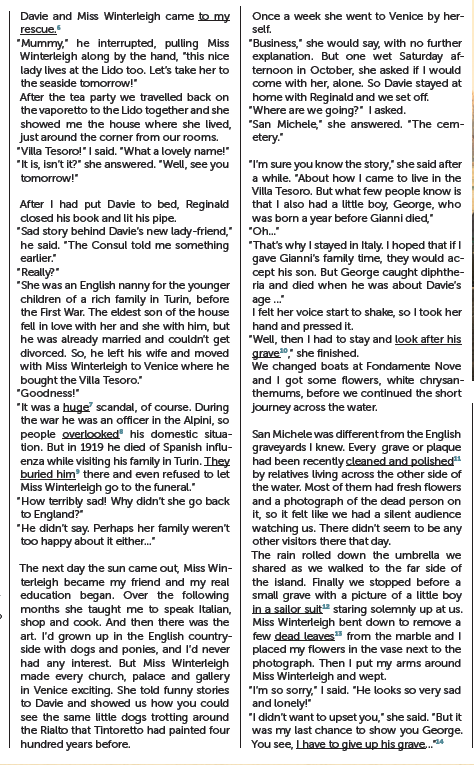 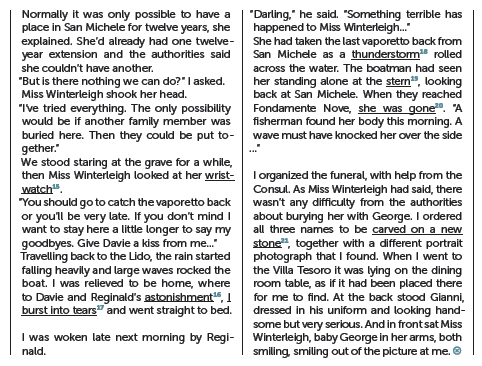 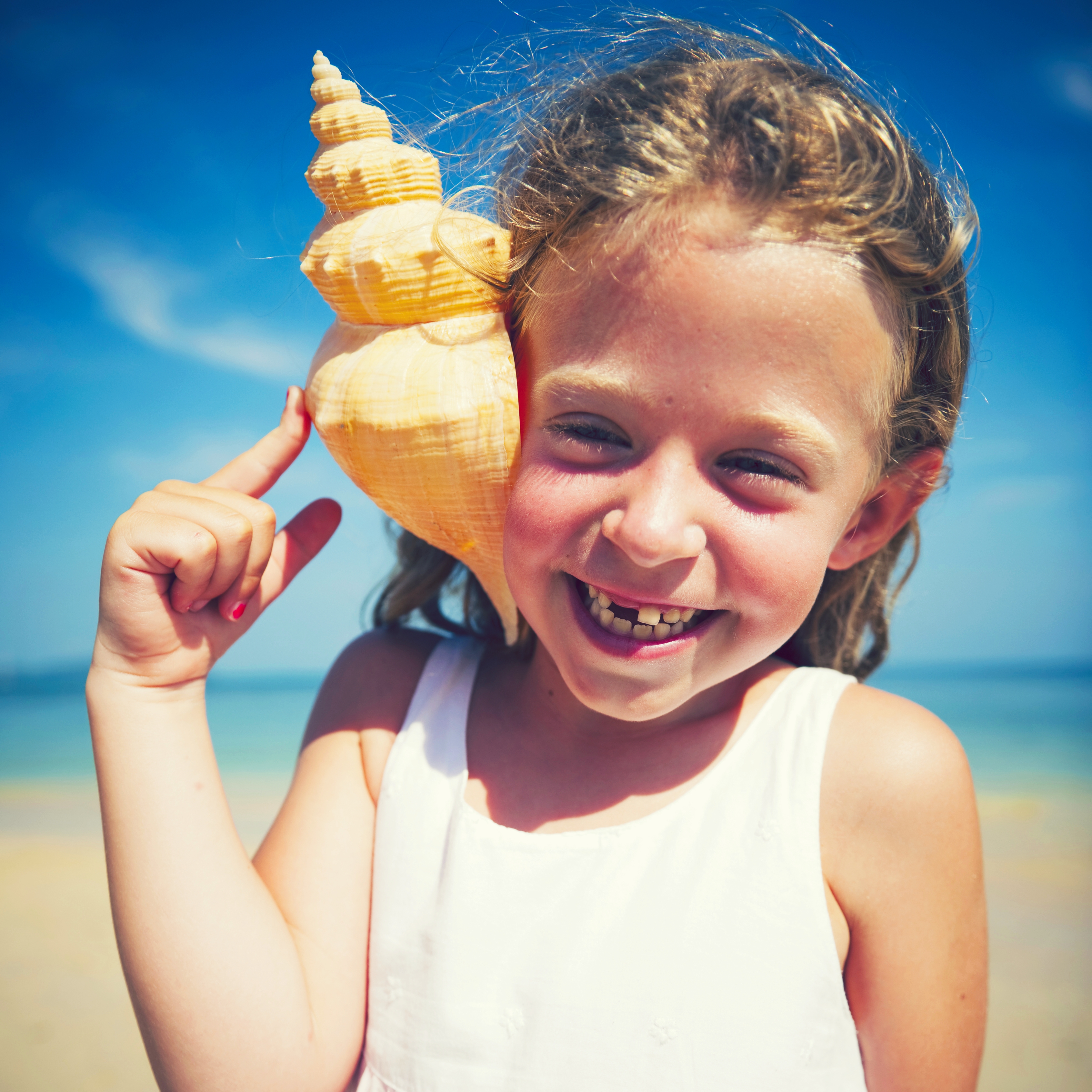