Are you hiding your veteran status?

Welcome to transition from the military to civilian life.  You see, I thought I had it all planned out.  I thought I was a first round draft pick.  You know what I mean….it was THE day - I expected to walk out of that building and into a life I had dreamed of for the last 20 years.  Offers for a job were going to pour in and money thrown my way - or so I thought.

You see I did 20 years of military service in the US Air Force as a Project Manager in Communications.  One of my projects was helping with a project that would be the backup communications system for the North American Aerospace Defense Command  (NORAD).  So yeah, I thought I was marketable material. But what happened was so opposite of what I expected.  Civilians didn’t acknowledge or ignored my service - let me repeat that - my 20 years of service meant nothing!! Think about it for a minute.  Imagine for a minute that you decide after 20 years that you want the same job but in a different city, state, etc.  But during the interview, your experience isn’t revered or acknowledge and they give you a job less than what you expected.  Hurts doesn’t it?

I went into the military in 1980 and left in 2000.  After retirement, my husband and I moved to Massachusetts.  I’m still feeling disconnected and not really sure what’s wrong even though I did get a job.  I even hid my veteran status.  Why you ask - because no one understood it or acknowledged it.  It was only after 9/11 that I started to share my veteran status in every way possible.

in 2008, we moved to Charlotte, NC and it was then that I wanted to get involved with veteran organizations and participate as a veteran.  What I found, was that these events were mainly men and not geared towards women. So out of 100 people at an event, 96 would be men and there would be four women at table.  This didn’t feel right either.  Where were my veteran sisters?  So, in 2015, I formed the Welcome Veteran program because I wanted to help veterans - all veterans. But helping all veterans in every way was kind of like eating an elephant - where do I start? So I just stood still and did nothing….

in 2017, I was given the opportunity to get involved with a program call the Women Veterans Network (WoVeN).  A chance to talk with my veteran sisters from all branches.  It was amazing!! Where have they been all this time?

You see, veteran women rarely self-identify as a veteran because of the flack they receive from other people.  We are told that we didn’t do the hard jobs because that was left to all the men.  We as women don’t “look” like veterans (still not sure what that means) or that because we didn’t fight in a war that our service doesn’t count.  Even in social situations when my husband will say that we are retired military, the conversation is directed 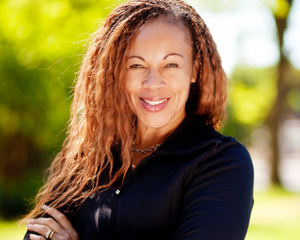 towards my husband. Only after my husband say that his wife is the retiree, does the conversation stop altogether almost as if they have nothing to say to meSince 2017, I am still associated with WoVeN as a National Consultant and I am WoVeN for life.  Why? I found my tribe, I have made friends with many women and it’s where I feel i belong.  I don’t have to apologize for anything I’ve done military wise because they all “get it”.  I started out wanting to help women veterans but during this journey I found “me”.  I found my voice and  I started a podcast called Sisters-in-Service and I am enjoying what I do for the first time since leaving service.

So you see, I’m still that first round draft pick and I finally got drafted by believing in myself and what I bring to the table.  I wear my veteran status proudly and in every way to let everyone know what I am - a proud female veteran!

Veterans Administration (VA) benefits are available to widows and widowers of veterans who meet certain requirements. These benefits can help them secure…

Embracing the unknown: Command your Power and Step into yo…

I found my power or as I call it -stepping into your magnificence later than most.  Actually I started to realize my power during my 50&rsqu…