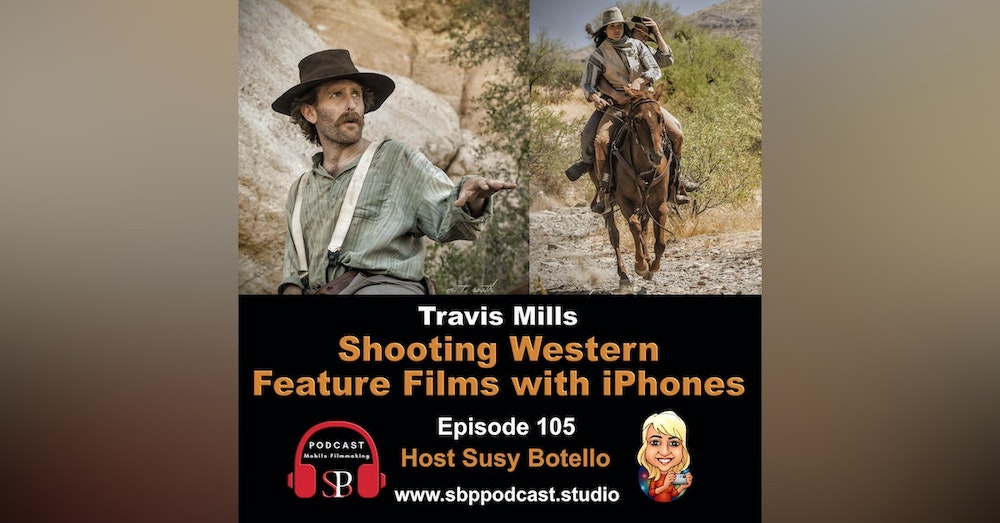 Travis Mills is the Director and CEO of Running Wild Films. He has challenged himself to make 12 Western films in 12 months, one per month. In episode 105 of the SBP Podcast Mobile Filmmaking, we share the story of one of these films, which was shot with...

Travis Mills is the Director and CEO of Running Wild Films. He has challenged himself to make 12 Western films in 12 months, one per month. In episode 105 of the SBP Podcast Mobile Filmmaking, we share the story of one of these films, which was shot with the iPhone.

Read the article for this episode in our Smartphone Filmmaking Publication: https://medium.com/smartphonefilmmaking

Travis loves a good challenge and calls himself a bit “crazy” so he jumped at the thought of shooting one of 12 Western films in 12 months with the iPhone. In 2013 he challenged himself to shoot 52 films in 52 weeks, and that was part of how he began to set incredible goals as a filmmakers. He continued to make films and feature films over the years and he came to the idea that he would make 12 feature films in 12 months. However, he upscaled that challenge because he figured it wasn’t hard enough. Remember, Travis is a bit crazy, right? He decided to make the most challenging features by shooting Westerns.

Westerns are a unique genre because of the challenges, from sets, locations, horse wrangling, shootouts…it’s a big challenge in itself but shooting it all with the iPhone is both interesting and intriguing. One one hand, all these details can be challenging for any filmmaker using traditional cameras. On the flip side, it also becomes a relief to film using a smartphone due to the minimalist production process. Thinking about tearing down the equipment after shooting a scene with a smartphone is a lot easier to do with a small camera. What people think about though, is those grand shots of people riding horses and stage coach scenes. That didn’t seem to get in the way of the film, from the rough footage I watched, because again…the story itself is captivating. As you are following the story, the wide shots on the Western landscape are simply a part of the storyline.

Travis is one of the characters in the film, one of the protagonists. But the main character is Pearl Hart, played by Lorraine Etchell. Her performance is worthy of mentioning. Her acting brings her character to life and watching her really brings you close to the turmoil she experienced in her life’s story.

The Woman Who Robbed A Stagecoach film tells the true story of Pearl Hart, a female outlaw who became famous for robbing a stagecoach and escaping prison in Arizona at the turn of the century.

The film also features actors Travis Mills, Kevin Goss, John Marrs, Michael Estridge, John Schile, and many more. It was written and directed by Travis Mills, and is part of the “12 films made in 12 months” and the first Western feature film shot with an iPhone.

Most of the film was shot in Globe, Arizona. But they traveled to Yuma and they were able to shoot at the prison in the cell where Pearl Hart was held. Travis shares his character, and the unknown history about him which he had to create for the story in the film. The conversation brings the topic of bringing actual history into a film based on a true story. One of the ways to do that, was his insistence on shooting in the actual locations in Arizona, instead of shooting the film in more picturesque locations.

Travis was inspired by Sean Baker’s Tangerine and since then, he’s been twirling the idea of making a feature with an iPhone. In the podcast, he shares some of the ideas he’s had for a mobile feature but it was the story of Pearl Hart that he kept thinking about.

The budget for the movie was about $6,000 and it was a 15-day shoot. Considering it’s also a Western, it was a very modest budget. His crew was four people and they had no experience shooting on the iPhone. They learned about mobile filmmaking along the way.

Listen to Travis share his own story of what brought him into film. Part of that story is that he was obsessed with movies growing up. Interestingly, he grew up in the Comoro Islands in the southeastern coast of Africa.

Pioneers are paving the way for the future of the mobile filmmaking industry. It’s inspiring to share pioneers like Travis Mills in our podcast. If you are looking for inspiration and information about this niche industry where more and more people are making incredible films using smartphone cameras.

Close to the end of our conversation, Travis shares how the daunting process of feature filmmaking can be achievable, and how to push yourself as a filmmaker. He shares some of the filmmakers that inspire him.

SBP Podcast Mobile Filmmaking: The Voice of Mobile Film™ is for everyone who ever wanted to or is curious about making movies and videos using smartphones.

Watch the trailer for the film which features a version of Buffalo Gals, performed by Courtney Odom: https://youtu.be/ig1xhBtyDUI

Subscribe, support and listen to bonus episodes and more on Patreon: http://patreon.com/sbppodcast