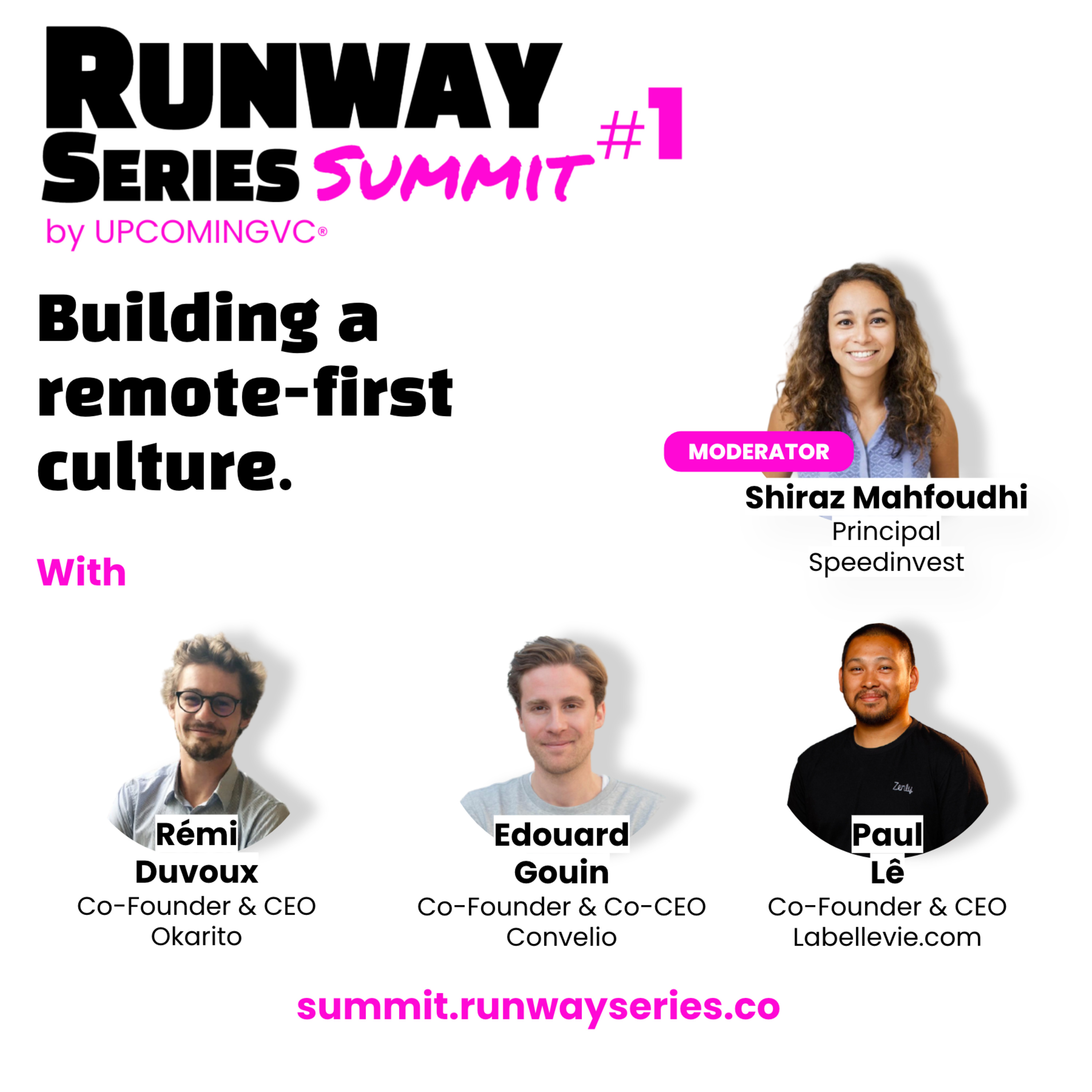 Building a remote-first culture - Talk 2 of the "Runway Series Summit: The Fundamentals of Success".

Season 3
Moderated by Shiraz Mahfoudhi (Speedinvest), with Rémi Duvoux (Okarito), Paul Lê (Labellevie.com) and Edouard Gouin (Convelio). - - - This episode "Building a remote-first culture" is an excerpt of the full talk (2 in 13 talks in total) that was held during our first «Runway Series Summit: The Fundamentals of Success». Head to summit.runwayseries.co to get the full episode and detailed shownotes. Enjoy the show! - - - Over 3 days on June 1-3, 2021, during break lunches (11.30 - 1.45) and at the end of the day (5.30 - 7) and in 4 time zones, we received 39 guests (28 VC & 11 CEOs) including 31 who had already come on the Runway Series podcast. With «Runway Series Summit: The Fundamentals of Success», the idea is to take a step back from the usual discussions on execution, in order to understand what are the fundamentals of success, with 13 panels covering the DNA of entrepreneurship, the dynamics of co-founding teams, branding, focus, change, remote, data, creativity, diversity and inclusion. And unique fact, these 13 talks are hosted by the 39 guests who themselves are the moderators of these talks, which mechanically increases the quality of the talks. Top speakers from French startups / scaleups (Double, Labellevie, Supermood, Medadom, Convelio..) and French VCs (Frst, Elaia, Ventech, Cap Horn, Ring, Kima, Eutopia, Axeleo and many others) participates but also European VC partners, such as Evgenia from Dawn, Sia from Seedcamp, Jon from e.ventures, Louis from Point Nine, Mathias from Speedinvest.., as well as investors such as Marguerite from Cherry, David from Brighteye or Vincent Head of MarComm's at Northzone which also shows the attractiveness of the French scene for discussing structuring and fundamental subjects. - - - The podcasts Runway Series Originals, AMA VC, Human Factor, No-Code VC / Fit & Venture Talks are produced by UPCOMINGVC® (www.upcoming.vc), imaginated and hosted by Raphael Grieco.