Unlike the scary stories tell, not all brujeria is evil and it is fascinating that a reclaiming of brujeria seems to be occurring in the Latine community. The scary bruja legends are still fun to read, but do keep in mind that Christianity changed the way brujeria was perceived in Latin America.

It is said that in certain regions of the Mexican state of Hidalgo, it is prohibited to say the word “bruja” on Fridays and many people still put salt on their rooftops, as well as place scissors in the shape of a cross below their beds. In the town of Huichapan, Hidalgo, many still tell stories and legends of shape-shifting brujas and of seeing the fireballs on the far away hills. Newborns are especially protected here, as the brujas, that shift into guajalotes (turkeys) spend the night time looking for newborns to suck blood from. It is an old belief that witches tongues turn into spider webs and at night, the web reaches into a newborn baby’s crib to suck their blood. Many would use iron scissors to cut spider webs before putting their baby down for the night, and then in the morning, these cut up webs would be said to have shifted back into human tongues.

Women that were single, spent a lot of time alone and had jobs like midwife, healer or curandera were suspected of being a bruja negra. Brujas are said to remove their legs, in order to transform into the guajalote (turkey) or to have the ability to become the flying fireball. If the bruja returns to her house and cannot find her legs, her death is inevitable.

Aculco is a municipality in the Atlacomulco Region of the State of Mexico. Aculco is said to be a very cold place, as well as a place full of legends. One of these legends is called “La Bruja”.

Many years ago, there was a beautiful young woman, with long black hair and golden skin, all the young men loved her, but the elders all warned them to stay away from her, for her family practiced black magic and she was a bruja. Despite her beauty, no one was willing to marry her and grant her her biggest wish, to be a mother. The years went by, and by, and she was still alone. Eventually, she was too old for her dream and she grew resentful. She became full of hate and set on vengeance, and was said to have made a deal with the devil.

Soon after this, a child was missing in Aculco, then another and then a third. The townspeople immediately suspected the bruja and they all marched to her house, pitchforks in hand. They were ready to burn her alive and decided to knock her door down, but at that moment, extreme coldness and fog surrounded them. Then, a loud voice boomed from the giant tree next to her house. The voice said terrible things and then told them she was the one they called bruja, and she took the children as revenge. A man in the crowd rushed the tree with an axe, but then the cries of children were heard. The bruja began laughing, then told them the soul of the children were trapped in the tree too.

The mother of the children begged the man not to tear the tree down. To this day, the tree remains, and they say that if you stab the tree with a knife, the tree will bleed and the crying of children can be heard, along with the laughter of the bruja.

This is a story from Reddit, and was submitted by u/fluffygsam, as a comment to a post in the truth is here subreddit. u/fluffygsam, was raised by their grandmother, and she would tell them all sorts of stories, but one particular day, they wouldn’t go to sleep and so she told them a scary story, that she would then retell all the time. It goes as follows:

The first year of the child's life has passed and he's begun to walk, my grandparents were so proud. One night they put him to bed and they themselves turned in for a headstart on what would be yet another sleep deprived night, such is life with an infant. For whatever reason they fell into a deep restful sleep but apparently my great great grandmother felt something was wrong in her sleep and sat bolt upright.

My grandma tells me that the first instinct her mother had was tl check the child and that is what she did. The baby room was adjacent to theirs, we were a rich family once so a multiple bedroom home was a status symbol in the town, and tried the door and found it to be locked from the inside.

By that time my great great grandfather had awoken and almost immediately they heard the most inhuman cackle from the other side of the door. After some struggling they managed to get the door open and the child was gone. She told my great grandmother that "en este moment, sentí como mi mundo entero se había acabado". Roughly translated she said she felt like her world had ended.

All that was left of my would be great great granduncle was an empty crib and the pain in the hearts of his parents. Fast forward around a hundred years, I'm born. The first born son of my generation, the eldest of all the grandchildren like the child would have been. My grandmother forces my baptism as early as possible.

The house we had been living at the time was adjacent to a notorious home in our city that was reportedly a hive for occult activity, we were poor so a house in the slums was all we could afford. One night, just after my first birthday my mother awakes much the same way her ancestor did a century earlier to find a locked door to my room. The door again opens after some struggling but I'm unharmed, the window is open which had been closed, and a "feeling of evil perverted the room" or so says mother.” 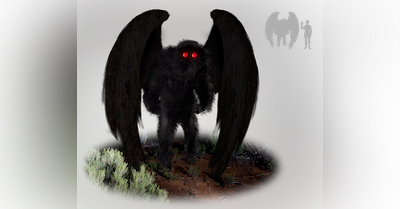 Many hear the name Mothman and think West Virginia, but there are many Mothman sightings outside of the United States, including various countries in Lat…