The Crucial Distinction Between Following Up vs. Following Through 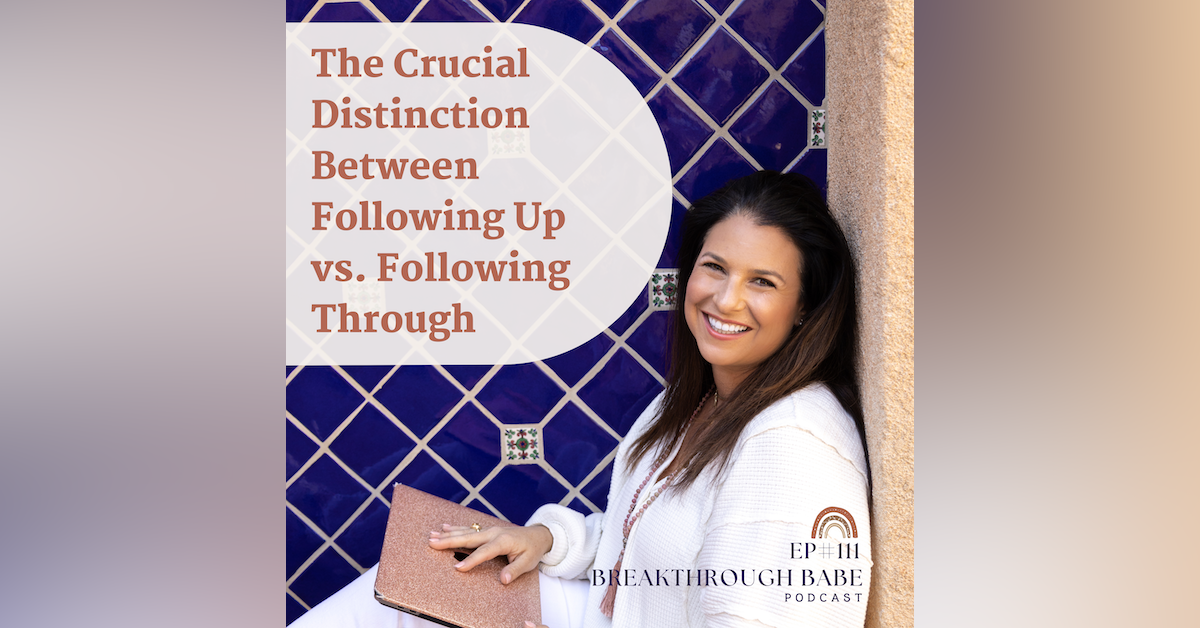 Picture this: You’ve just had a great discovery call with your prospective customer. They weren’t quite ready to buy in yet, and you know you’ll need to check-in with them soon to find out their ultimate decision. You write yourself a note to...

Picture this: You’ve just had a great discovery call with your prospective customer. They weren’t quite ready to buy in yet, and you know you’ll need to check-in with them soon to find out their ultimate decision. You write yourself a note to follow-up, cringing at the thought, because following up just always feels so… icky.

In today’s new post, I’m teaching you how you can make the subtle, yet powerful swap to begin following through with your customers, rather than following up, so you can gain momentum in your sales process and close more deals - all without coming across as sleazy, salesy, or annoying.

Read on to discover how to follow through in ways that actually deepen your connection with your customers rather than pushing them away.

Finally closing a deal over 1 year in the making

Would you like to celebrate with me? I’m so freaking excited because I just closed a deal that I’ve been working on since April 1st of 2021. Yes, you read that right - 2021.

While the deal closed for a smaller amount than I had originally anticipated, it is still a five figure monthly sum for numerous months on a trial basis. And believe me - we are going to crush this trial by showing off the impact we can create, and I’m certain we will get hired on a long term basis. So that's pretty damn awesome.

But here’s the thing - had I not stuck around in the follow up, I never would have gotten this deal. It would likely have gone to someone else, or it would have fallen by the wayside. This deal closed because of how I followed through for over a year.

How does follow-up transpire in your business deals?

How often do you typically follow up with a prospective customer? How do you feel when you’re doing it?

If you’re like the grand majority of my clients, you probably tend to follow up a couple of times and if you don’t hear back from the prospective customer, you give up and move on to your next lead.

Maybe following up makes you feel sleazy and you avoid it as much as you can. In the traditional sense, following up is basically calling someone and asking, “Can I have your money yet?” And that just seems gross, like you’re nagging. No one wants to talk to that person, and no one wants to BE that person.

Here's an important lesson that I learned in tennis. If I just hit the ball, then stop my swing after I hit the ball, it doesn't always go where I want it to go. It doesn't always set you up for success on the next shot if you just hit the ball and then watch it. But when you hit the ball and follow through with your racket and swing all the way (which, by the way, is a lot harder), your odds of landing the ball exactly where you had intended to increase. Why? It’s all because of that one thing: the follow through. Following through helps ensure that the ball is going to maintain its momentum through the point of contact. How interesting is that?

The difference between following up vs. following through

When your customer doesn't buy on the phone during your discovery call (because many customers aren't ready to pull the trigger while they're on the phone), it's important that you are able to nurture them and follow through after the fact.

But I don’t want you to merely follow up anymore. You’re not going to make calls or emails where you say, “Hi! I’m just following up…” or “I’m just checking in!” The sole purpose of that is asking for money, for a signed deal. And that turns people off and doesn’t lead to consistently closed deals.

Instead, you’re going to start following through. What’s the difference? Well, when you’re following through, you’re doing so strategically to gain momentum and speed up the process towards the sale.

Start by setting an intention. How are you going to help this prospective customer if they say yes to you?

If you don’t feel comfortable following through with them, remind yourself that they had the initial conversation with you because they were interested and wanted your help. The only way for you to get them the help they need is to follow through and get the sale.

If you truly believe that you can help them, then you can give yourself permission to follow through as many times as it takes to close the deal. You’re not being salesy if you’re reaching out with the intention to serve.

Every time you reach out and follow through, do so strategically. Each contact should move the sale along in some way or another whether it’s deepening the relationship, adding credibility, or setting the stage for the sale later on.

Here are a couple of examples of following through:

One way to set the stage for your follow through is to make sure you have your next meeting set before you end your initial call. Get it on the calendar. That is your move forward date. You can do this by asking something like, “If you're not ready to make a decision today, then when will you be ready to make a decision? Let’s book a call for that day so we can celebrate the good news together!” There are so many fun ways you can add playfulness to this step to be personable and not salesy.

To avoid getting ghosted, be sure you show enough value and create demand throughout your sales process. Reinforce how you’re on the same page - the help they need, the help you can provide, and when they want it to start. You want to build urgency for their problem to be solved.

If you don’t hear back from a prospective client, follow through with value. You want to share an idea or something else they’ll perceive as valuable, and have it be something that furthers the conversation. Find something that will create a response such as, “Wow, this person really paid attention and cares about me. You can do this by emailing or texting an article link or perhaps a YouTube video. Even better, send over a video message. We use a video system that creates a lot of impact because you’re able to re-engage with your face and overall vibe. It familiarizes you.

It's follow through, not follow up that is going to close your deals. To follow through means you're acting with value. You're acting with intention. You're acting strategically every time you interact after you have that initial call. You're doing things and giving things that prospective customers will perceive to be valuable - things that further and deepen your connection. Keep on following through until you stop believing that you can help them. If you continue to believe you can help them, you need to keep following up because it is your duty to show them that.

Want to talk about more ways to follow through in your sales process? Reach out to me on Instagram @jengitomer