Are you Letting this Piece of Paper Kill your Sales? 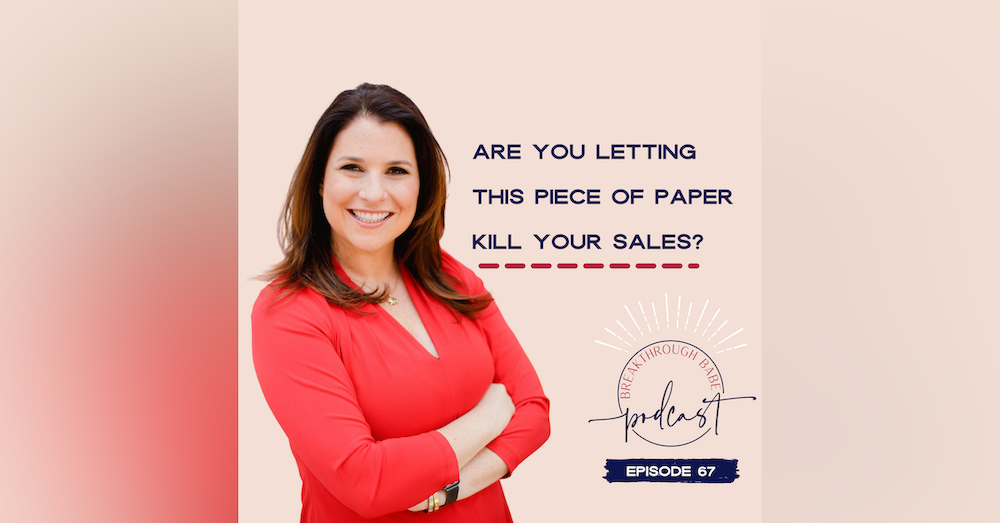 So, you’ve just hung up from yet another discovery call and now you know you’ve got a task you dread laid out before you…   You’ve got to write the damn proposal.    Be honest - how much of your work life do you spend on...

So, you’ve just hung up from yet another discovery call and now you know you’ve got a task you dread laid out before you…

You’ve got to write the damn proposal.

Be honest - how much of your work life do you spend on proposals? I see it all the time; that shit gets heavy. Between coming up with an impactful design, customizing a package you think will appeal to your client, and writing out your pitch, it’s easy to get stuck in the muck and lose valuable time on this aspect of your business.

This week on the Breakthrough Babe Podcast, I’m going to share my perspective on proposals that’s not only going to make them 10x easier to put together, but will also make them more effective and less likely to get you ghosted.

And NO - I won’t be recommending any particular design programs, or giving you a proposal template to copy. What I AM going to be doing is sharing what I see the grand majority of entrepreneurs getting wrong with their proposals, and how to change the role this document plays in your sales process to Close. More. Deals!

Let’s get into it! Have you ever felt like you're spending so much time on proposals, that it’s killing your mojo AND your sales? You have these great discovery calls and then you have to make the proposal - wah wah. What should be exciting feels heavy because there’s so much to think about, customize and put together and then, after doing all that, you feel like you have to design it and make it look pretty and presentable, which feels exhausting just from the process of the whole thing.

Damn those proposals! But here’s the reality: Creating the proposal is not the problem, it’s a symptom. And unfortunately, people try to fix  the actual “proposal issue.” So they'll focus on finding new tools, like Dubsado or Honeybook. Those are great tools, but they’re not actually solving the sales problem.

Because when you send the proposal off, you're still getting ghosted. You've done all the things to make it look amazing and customized, and you've spent so much time on it. However, how often do you not even hear back from the potential person who might buy from you? It's the worst feeling ever.

You might be thinking that a piece of paper or a brochure that you hand someone or email to someone will give you another chance to sell them. But, let me tell you that's not going to get you the sale. Here's the dealio. They need to be sold before they get the proposal. I only create proposals for people who are ready and willing to buy. It's less of a proposal and more of an agreement - they can see the terms, the scope of work, all the things they will get and the intended outcome.

The proposal should just be a formality. Maybe, 5% of the time you don't know if they’ll move forward, but 95% of the time, if you've had an effective sales conversation with your prospect, then you’re ready to proceed with the next step.

I wanted to share a recent sales conversation. The potential customer and I had been corresponding by email. I gave them my number to give me a call to talk about it further, but I missed the call  cause I was in a meeting when they called. It wasn’t until after nine pm that I realized they called, and luckily they were on the west coast where it was 3 hours earlier. I decided to call them - the more quickly you can respond to a customer that’s ready to buy, the better. At the end of the conversation, we reached an agreement and I said, “I'm going to send you an agreement and an invoice in order to secure this date. Then, we can move forward.” And boom! The sale was born. Notice one thing? No “proposal”.

I didn't call it a proposal because I made the proposal verbally over the phone. Stop relying on a proposal to make your sale! Instead of proposals, why not just send the agreement? Have enough of these calls where you feel comfortable talking about all the things you can do for them, and obtain agreement before you get off the call. So you know exactly what the direction is going to be.

Have the actual price conversation. Don’t be a chicken!

You may be thinking, “I need the proposal to sell the price.” Why? Why would you wait to talk about price? Have you ever made a high ticket decision without actually knowing what it was going to cost you? Most of the time, when people make high ticket decisions, they need to know the price!

In fact, I personally cannot think of a time where I haven't known the price whenever I make a high ticket decision. I don't want to judge my buyers, but I feel most of them want to know the price. So why keep it some sort of secret and then rely on a piece of paper to tell your story? You have a way better chance of telling (and selling) that story in a compelling way than a piece of paper. Plus, when they're on the call with you, they're the most interested and the most excited at that moment. So why not break it to them, whatever the price is, and overcome the objections right there and then?

How you communicate results matter. Don’t tell them, Show them.

My philosophy has always been that showing someone the results you can get them, is better than telling them. The best way to do this is to actually show them the results you've gotten for similar clients (make sure you have their permission to share). I'm not talking about a really well-prepared, well-rehearsed case study or a white paper. Those are nice, but they're almost salesy.

When you go under the hood and show, not tell, what's going on in your clients' world, use testimonials and let your results speak for themselves. Show live samples if you can. It will feel so much more natural and organic and allow you to feel comfortable talking about price. It then makes it easy to set yourself up to say, “Those are the kind of results I've gotten for other people, and I'd love to be able to help you get similar results.” After that, you have an easier time justifying the fee because you're talking about it in a result-oriented way.

When you begin to do all of these on your sales call, uncovering their needs, talking about how you can help them, talking about how you've helped others, discussing the price, then the proposal doesn't have to feel so overwhelming. It just becomes a shared document that you can look at and agree on the scope of work. Then, when you start having more full conversations with all the details they need to know to move forward to make the sale, overcome the objections, and talk about what might be holding them back from moving forward, you’re going to make so many more sales.

However, you may still feel uncomfortable having the pricing conversation, but it might be hard to uncover that without talking about it with your potential client. So if you feel like something is still holding you back from having all the right processes on the sales call or even talking about the price, just send me a direct message on Instagram: [Instagram Account], and let's see if we're a good fit to work together.

If we're not, no pressure, we can still keep in touch. But this is my absolute passion and obsession. I love helping people grow their businesses, and you can't grow your business if you don't make more sales. You need more sales to increase your earnings and make your business profitable. So if you feel like you're still using the proposal to make the sale for you, let's chat about it. Let’s help together for the success of your entrepreneurial career and your business.

Tune in to Episode 67 of The Breakthrough Babe Podcast - it’s time to stop losing out on revenue!