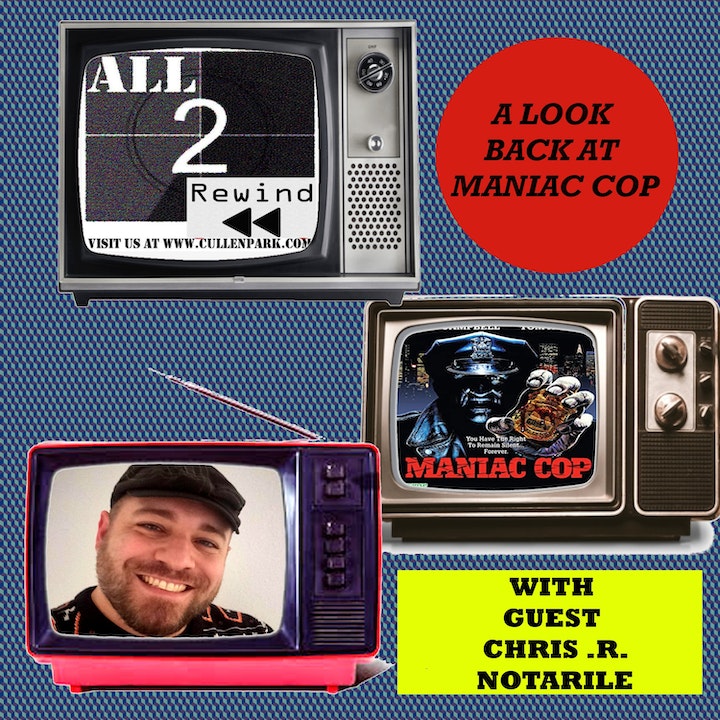 In this episode of our ALL2REWIND series we look at the film Maniac Cop (1988).

Innocent people are being brutally murdered on the streets of New York City by a uniformed police officer. As the death toll rises and City Hall attempts a cover-up, Frank McCrae heads the investigation. A young cop, Jack Forrest, finds himself under arrest as the chief suspect, having been the victim of a set-up by the real killer and a mysterious woman phone-caller. Forrest, his girlfriend Theresa, and McCrae set out to solve the puzzle before the Maniac Cop can strike again.

Our guest this episode is Chris .R. Notarile. Chris is a 2005 graduate from the School of Visual Arts with a BFA in animation, specifically acquired to become a more efficient filmmaker. Majoring in Stop-Motion animation, (a sub genre in which films like "Corpse Bride" and "The Nightmare Before Christmas" are made) Chris learned various techniques in the art of special FX making, from makeup and prosthetics to set design and prop building.

Upon his graduation, Chris had already amassed nearly twenty short film credits to his name and by 2017, well over 300. Some of his more notable works include the very popular online horror fan film, "The Nightmare Ends on Halloween", a horror short that brings Freddy, Michael, Jason, Leatherface and Pinhead together; the viral PSA- The Powerpuff Girls which is Chris' fasted growing video; the notorious online film serial, "The Deadpool Webseries" (which caught the jealous eye of 20th Century Fox) and the fan favorite "Krueger : Tales from Elm Street", which has been hailed as the definitive origin series for Freddy Krueger by fans and ANOS alumni, alike.

In August of 2007, Chris began work on his first feature film, "Methodic", which is also, officially, the world's first basher movie- a sub genre of horror created by Chris himself. The phrase was coined after deciding that the killer in "Methodic" would actually beat and bash his victims to death.

Shot for a next to nothing budget, in a record-breaking ten day shoot, Chris made "Methodic" into everything he felt the horror genre represented. "Methodic" hit stores on DVD, domestically, in September of 2009 and was later picked up by Netflix for instant streaming. In his time, Chris has amassed a notable fan-base via his Youtube channel with over 60,000 subscribers and over 30 million channel views.

Chris is the CEO of his own company, Blinky Productions Inc., which operates out of California and has produced dozens of commercials, music videos, event coverage, short films and feature films alike.

FIND MORE ABOUT CHRIS BELOW:

Check out some cool music from Jason Quick at www.jasonquickmusic.com

If you can during these troubling times make a donation to one of the following charities to help out.